The Works of Charles Robert Maturin 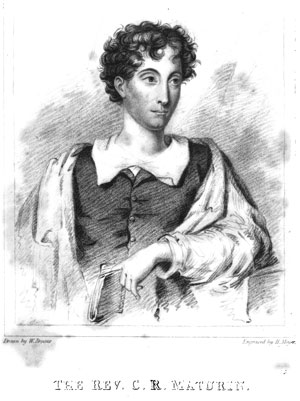 The Works of Charles Robert Maturin, a series containing his novels, plays, and sermons, seeks to present a reliable, freshly typeset, and judiciously annotated text of Maturin's works.

The volumes in the completed series are as follows:

The Works of Charles Maturin is available from Lulu.com and other on-line outlets.

Charles Robert Maturin was born in Dublin in 1780, and died there in 1824. He was ordained in the Anglican Church of Ireland, and from 1805 until his death he was the curate of St. Peters in Dublin. He was the author of six novels, many incorporating, to varying degrees, elements of the gothic genre, the most famous of which is Melmoth the Wanderer (1820). He also wrote three plays, one of which, Bertram (1816), had success on the London stage; but otherwise his writing did not yield financial rewards. His meager church salary and eccentric, spendthrift habits ensured that he and his family (there were four small children when he died) remained in straightened circumstances, and his persistent and exhausting pursuit of literary success undermined his health, leading to his death at 44 years old.